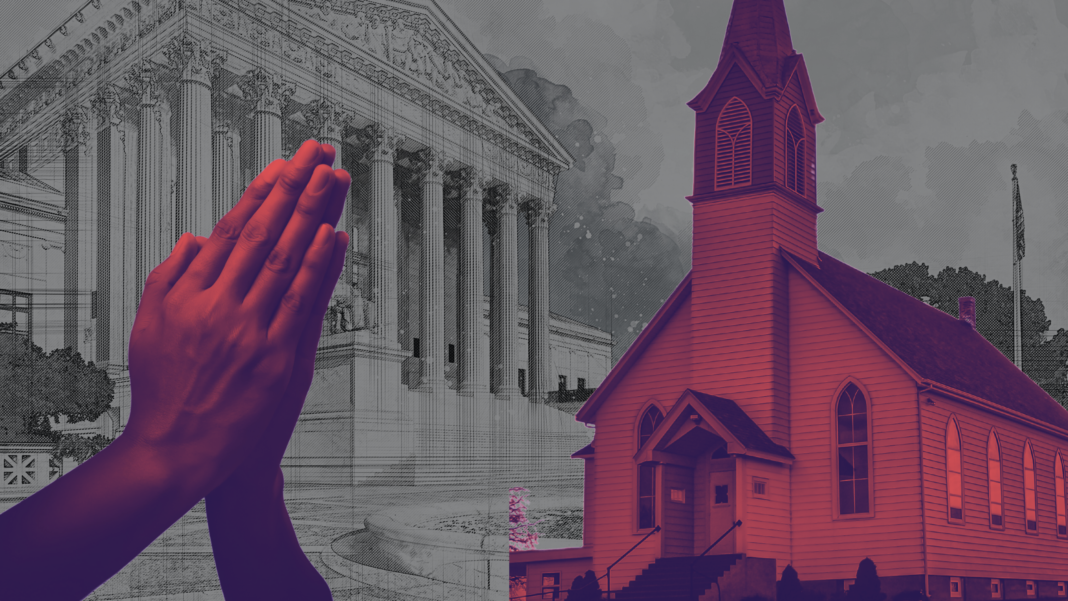 On Monday, April 25, 2022, the Supreme Court heard a case about whether a public-school employee’s prayer during school sports activities protected speech. This case will have provided a greater understanding of the Establishment Clause of the United States Constitution. This court case, Kennedy v. Bremerton School District, will serve as one of the most important first amendment issues the Court decides on in many years. For Christians, this case will give a clearer picture of when they can and cannot exercise their religion in an environment so adamant about remaining “neutral” on pushing any religious agenda. Christians need not look to the Court for permission to express their religious attitudes, but they must prepare for the consequences.

Ever since Everson vs. Board of Education (1947), the Supreme Court has made it clear that the Federal Government will not, “Neither can pass laws which aid one religion, aid all religions, or prefer one religion over another.” The Court has emphatically stated, time and time again, that the Federal Government will remain neutral in matters about religion, as to not favor one religion over the other; to not violate the Establishment Clause of the first amendment. Since Everson, the Court has repeatedly struck down laws that promote religious views in schools, such as invalidated requirements for Bible reading and the recitation of the Lord’s Prayer in the public schools, the overturning of an Arkansas law that prohibited teaching about evolution, and many others. The Court has made its position clear; the Court stands on neutral ground when it comes to the exercise of religion.

Christians have long disagreed with the Court’s neutrality on religion, Christianity expressly. Many Christians believe that the teaching of Christian dogma is necessary for a “well-rounded” education. What are Christians to do when and if the government rules against their preference with this idea in mind? Regardless of the outcome of Kennedy v. Bremerton School District, the question still needs to be answered. When the Supreme Court rules for or against their desired outcome, what are Christians to do? There are three answers to this question.

First, Christians need to remember that nine lawyers do not decide what is morally correct or morally incorrect. Morality is sourced in God. Morality, what is right and wrong, comes from heaven, not from Washington D.C. Whatever the Court rules in matters of religion, Christians are to keep their eyes on heaven and remember that God has decided on what is right because He is right. Christians do not take their orders from Washington D.C.; they get their marching orders from the Holy Scriptures. Christians are to respect governing authorities and to pray for government leaders so that they may live quiet and peaceful lives (Romans 13:1 & 1 Timothy 2:1-4). Still, they are not to violate what God has established, regardless of the Court’s interpretation of the Establishment Clause. Morality comes from heaven, not the Supreme Court.

Second, in the case Kennedy v. Bremerton School District and others, school systems had restricted religious activities to not coerce students into participating in religious practices against their beliefs. When the Court rules against a Christian’s desired outcome, the Christian is to be a Christian in all areas of their lives. Christians are to be as respectable as possible but never compromise on what God has asked them to, regardless of what people tell them (1 Corinthians 15:58 & Philippians 1:27.)

Third, when Christians live their lives as the Bible dictates, they will be accused of attempting to coerce people, as was the case in Kennedy v. Bremerton School District, they are to remain the course. Christians to comply in every possible area, in so far as it does not require compromise or disobedience to the sacred Scriptures. Christians are to respect the nine judges on the highest court of the land, but they must ultimately obey the Supreme Judge of all the earth. This is not to say Christians are to be religious activists and should cause a raucous. Still, they are to be obedient to governing authorities until the time the government asks them to violate their God-honoring conscience. If the government ever demands one to violate their conscience, only then is civil disobedience appropriate. Winston Churchill said it best:

In civil disobedience, there is a perceived conflict between two obligations. Individuals believe that the demands of morality or religion, often expressed as the requirements of conscience, require that they violate a legal command when there is a perceived conflict between the two. But while civil disobedience involves efforts by the disobedient to disavow personal complicity with an unjust law, it requires that the disobedient agent see themselves as otherwise citizens, or members, of the political order.

Kennedy v. Bremerton School District is gaining much attention from both religious and anti-religious groups. It is cases such as this that can cause a lot of people to compromise on their faith, and it can be a source of further division in this country. Christians are, rightfully so, concerned about how their faith is affected by societal and legal changes. The Christian is not to fear nor is to get caught up in these “civilian affairs.” This is not to say they should not care, nor stand for their civil liberties; stand and fight for your unalienable rights, but do not dissolve into agents of chaos. Christians are to be civil in all areas permissible but stand against the laws contrary to their Biblical principles. Christians cannot forget to remember that true objective morality comes from heaven. They are always to be Christians in word and deed, and they are to submit to governing authorities; until they are asked to go against the Word of God. The Supreme Court will make decisions based on what they deem correct and legal, but if the Supreme Court rules against Christian dogma, then the Christian is to remain the course. Jesus summarizes this by saying, “Let the filthy be filthy, and the righteous be righteous (Revelation 22:11.)