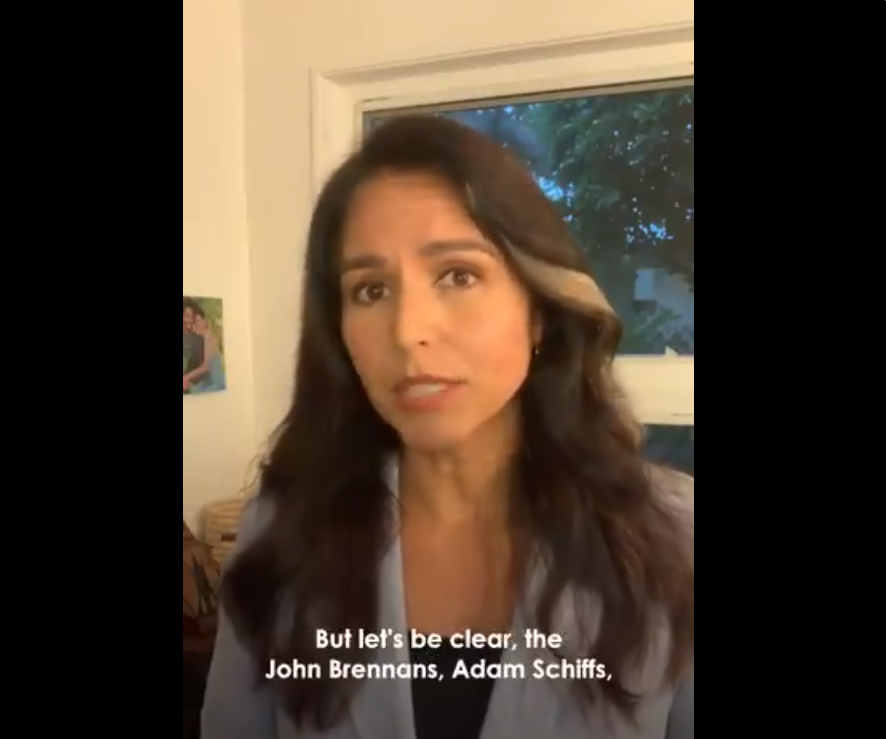 In a video posted to Twitter, Former Rep. Tulsi Gabbard, who served in Congress from 2013 to 2021 and ran for president in 2020, said, “The mob who stormed the Capitol on Jan. 6 to try to stop Congress from carrying out its constitutional responsibilities were behaving like domestic enemies of our country.”

The mob who stormed the capitol to try to stop Congress from carrying out its constitutional responsibilities were behaving like domestic enemies of our country. But let us be clear, the John Brennan's, Adam Schiffs and the oligarchs in Big Tech who are… pic.twitter.com/Q3VssCiz5l

But added, “Let’s be clear, the John Brennans, Adam Schiffs and the oligarchs in Big Tech who are trying to undermine our constitutionally protected rights and turn our country into a police state with KGB-style surveillance are also domestic enemies — and much more powerful, and therefore dangerous, than the mob that stormed the Capitol.”

Brennan served as CIA director under President Barack Obama during the Russian Collusion Hoax, and Schiff is one of the members of congress who led the Trump impeachment inquiry.

Gabbard’s video includes a clip of Brennan in an MSNBC interview in which he says members of the Biden administration “are now moving in laser-like fashion to try to uncover as much as they can about what looks very similar to insurgency movements that we see overseas, where they germinate in different parts of the country and they gain strength, and it brings together and unholy alliance frequently of religious extremists, authoritarians, fascists, bigots, racists, nativists, even libertarians.”

Hoping to calm tempers, Gabbard calls upon President Biden and Congress, “to denounce efforts by Brennan and others to take away our civil liberties endowed to us by our Creator and guaranteed in our Constitution.” Gabbard warns, “If you don’t stand up to them now, then our country will be in great peril.”