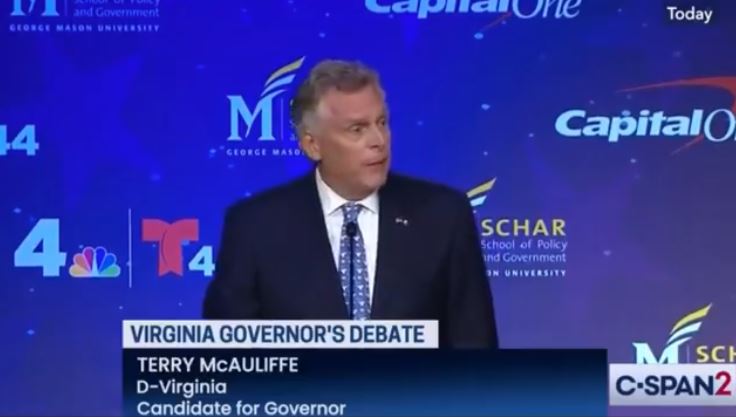 During a televised debate Republican and Democrat gubernatorial candidates Youngkin (R) McAuliffe (D) discussed the importance of education in VA, with McAuliffe stating he doesn’t want parents to have a say in what their kids learn in government schools.

Both candidates responded to a question related to transgender students in Virginia government schools. McAuliffe reacted to a report that parents had discovered and complained about books containing themes of graphic sex and pedophilia and were located in the government school library. After the complaint, the school district removed the books.

McCauliff’s response was, “I’m not gonna let parents come into schools and actually take books off and make their own decisions.” McCauliff also said, “I don’t think parents should be telling schools what they should teach.”

While McCauliff’s response may have received applause in the very liberal area of Northern Virginia, many throughout the state are becoming increasingly concerned over Virginia’s progressive and liberal-activist tendencies. In Loudoun County government schools, children are being taught Critical Race Theor (CRT), which emphasizes victimhood among races, while also teaching alternate versions of United State’s history.

Those working within government schools have been pressured to not speak out against the government school’s so-called anti-racist programs, going as far as to threaten their continued employment.

McAuliffe had also vetoed a bill that would have allowed Virginia to supplement parents who choose to educate their children at home.