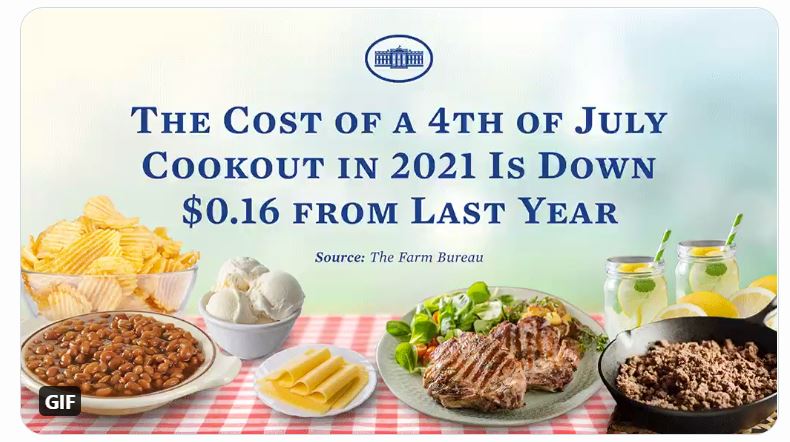 Late on Thursday, Former Vice President Joe Biden was mocked publically after the White House tweeted Americans were saving a whoppingly insignificant $.16 on the cost of food for Fourth of July celebrations.

The cringy, pun-filled tweet read, “Planning a cookout this year? Ketchup on the news. According to the Farm Bureau, the cost of a 4th of July BBQ is down from last year. It’s a fact you must-hear(d). Hot dog, the Biden economic plan is working. And that’s something we can all relish.”

Apparently, no one at the Biden @WhiteHouse has been to the gas station recently.

This is the HIGHEST price for a gallon of gas since 2014 and a 42% INCREASE from last year.

The mocking and criticism soon followed, with many describing it as an attempt to gaslight the American public. Many used the tweet as an opportunity to showcase rising inflation, rising gas prices, rising home prices and a host of other data points that showcase how Americans are not better off under the Biden Administration.

What in fresh hell is this? Housing costs are up by double digits, used cars are literally appreciating on dealer’s lots, and you’re talking about a BBQ? The Trumpiness of this tweet is just gross. Might as well forget about everything else that’s way more expensive?

Lunacy and divorced from reality.

One could argur this is worse than anything Trump tweeted from a policy perspective. https://t.co/9nycVknIrX

There weren’t many 7/4 cookouts last year and every article I’ve read says the cost of groceries is way up.. but okay. Cringey puns ain’t gonna save you, Joe. https://t.co/54xTYmzz9e

If President Trump were in the White House…

We wouldn’t have huge spikes in homicide & violent crime (except in Dem cities, sadly)

We wouldn’t have a 21-year HIGH in illegal crossings

And we wouldn’t be celebrating pennies in savings as inflation everywhere else SKYROCKETS⬇️ https://t.co/cRFZFqW1M9