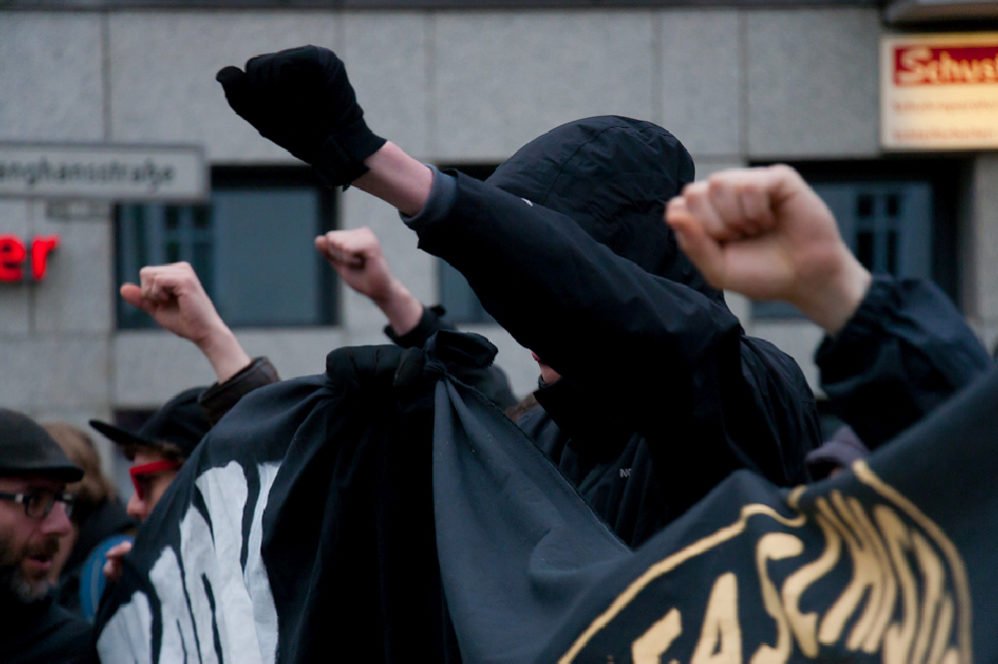 The event, described as a riot, was proceeded by a “peaceful” protest, according to Police statements. Officials stated after the protest, a mob  “wearing helmets and carrying gas masks, backpacks and tote bags” began to arrive in the city.

Portland police put out a statement outlining how events unfolded.

On May 25, 2021 at around 5:30 p.m., about one hundred people gathered at Revolution Hall in southeast Portland and walked in the street to the Burnside Bridge and back, over the course of about 90 minutes. The group had signs and drums and sang and chanted as they walked peacefully.

A little before 8:00 p.m., a different gathering started in the area of Southwest 3rd Avenue and Southwest Main Street. At about 8:45 p.m., they began blocking the intersection. Some people were wearing helmets and carrying gas masks, backpacks and tote bags.

At about 9:13 p.m., people pushed a dumpster against the Justice Center near Southwest 3rd Avenue and Southwest Main Street. People tried to get a fire started in the dumpster. Many people approached the Justice Center holding umbrellas to obscure their actions and movements. At least two people pried at doors on the north side of the building. Several people used umbrellas to conceal their actions and lit a fire in the dumpster at about 9:21 p.m. while people chanted to burn the building down.

Based on the criminal activity of people in the crowd, officers gave public address announcements that the assembly was unlawful. Officers moved toward the crowd to create space for Portland Fire and Rescue to safely enter the block to put out the dumpster fire against the building. People threw frozen water bottles, glass bottles, eggs and metal spikes at officers and fired mortar-style fireworks at officers. People tore down fencing around Chapman Square Park and used fence segments to block Southwest 4th Avenue near Southwest Main Street.

Police cleared metal spikes from the street so firefighters could get close enough to extinguish the fire. People in the crowd formed rows while those closer to the front of the crowd held umbrellas to obscure the view behind them. People from further back threw objects at officers including frozen water bottles, eggs and metal spikes. When the fire was out and firefighters got safely away, officers deployed smoke then left the area.

While the crowd blocked the intersection of Southwest 3rd Avenue and Southwest Main Street, some people incited others to move through the city to destroy property. At about 9:51 p.m. the crowd of over 200 moved west toward City Hall where people broke out windows. They walked north along Southwest 5th Avenue breaking windows and damaging property. Police gave public address announcements declaring the violent and tumultuous conduct of the crowd a riot and gave directions to disperse.

As the crowd walked through downtown, some people broke windows and damaged property at businesses. Slowly, as the number of people in the crowd became smaller and smaller, they began to spread out, fight among themselves and light occasional trash can fires. People within the crowd were overheard saying the night was a success.

By midnight the crowd was down to about a few dozen people milling around.

Ongoing, organized attack on system of justice and rule of law continues in Portland. From police: https://t.co/cuNWcBFbfT pic.twitter.com/USYwJRhDuM