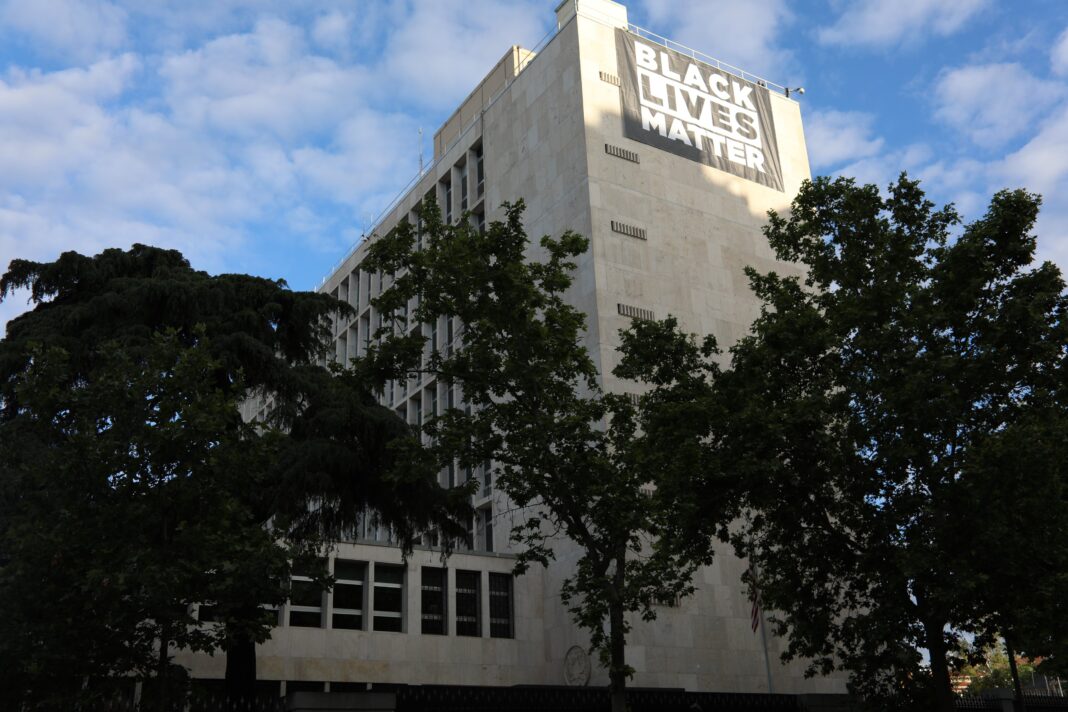 On the one-year anniversary of George Floyd’s death, Former Vice President Biden’s State Department saw it fit to allow Black Lives Matter flags to be flown at US embassies worldwide.

In what has to be one of the most high-profile forms of virtue-signaling ever created, many embassies placed the flag in prominent places on their buildings. In Athens, the US embassy seal was covered by the flag.

.@POTUS: “‘I can’t breathe.’ Those were George Floyd’s last words. We cannot let them die with him. We have to keep hearing them. We must not turn away. We cannot turn away.” #BlackLivesMatter pic.twitter.com/dxIQQRsN8W

According to The Heritage Foundation, one of the nation’s most respected conservative thinktanks, BLM was ” founded by committed Marxists whose goals aren’t to make the American Dream a reality for everyone—but to transform America completely.” While many who join BLM may not understand the Marxist-leanings of the organization, BLM itself does not shy away from their fundamental ideals. In a 2015 interview, BLM leader Patrisse Cullors said, “Myself and Alicia, in particular, are trained organizers. We are trained Marxists.”

A clear example of their Marxist-leanings can be found in how they stated their position on family. In the past, the official BLM website had a section called “Read the list of demands.” One of which was the elimination of the nuclear family, which is a distinctly Marxist idea. The now-removed passage stated, “We disrupt the Western-prescribed nuclear-family-structure requirement by supporting each other as extended families and ‘villages’ that collectively care for one another.”

The Black Lives Matter organization has also been at the forefront of the defund the police movement. While many would say BLM is not directly responsible for defunding police, the Heritage Foundation is quick to point out that BLM has had close ties with “Movement for Black Lives (M4BL), and that movement specifically calls decriminalization and defunidng the police. This organization has stated one of their demands as being,  “the retroactive decriminalization, immediate release and record ­expungement of all drug-related offenses and prostitution and reparations for the devastating impact of the ‘war on drugs’ and criminalization of prostitution.”

What many Americans and media fail to note is Black Lives Matter is more than a social justice organization. Their stated goals and connections to Marxist-favoring groups and ideals. With that said, many Americans wonder exactly why the US government would choose to support this particular organization, knowing the group has its roots in an extremely Marxist agenda.

Today marks a year since the brutal murder of George Floyd. The senseless killing spurred Black Lives Matter protests to demand an end to systemic racism, what @SecBlinken has called “a time of reckoning in our nation.” pic.twitter.com/c2gPTVH1WF

As we mark the 1-year anniversary of the murder of George Floyd, we are reminded of injustices that persist and our commitment – and obligation – to seek justice, equality, and respect for all. #BLM pic.twitter.com/udiyt5JMaY